Happy weekend friends!  I should have been saying happy Friday, as this post was planned for then, but if you saw my Instagram yesterday then you know that life happened (ie: we all got sick) and time got away from me.  So rather than not post at all, I decided to extend it a day.

Now, what I really want to say is….we made it!  We made it through Leyton’s first year!  I can’t believe that year has already come and gone.  As I was looking through pictures to put in this post, I have so many emotions. Obviously sad that, that tiny little peanut isn’t that little anymore.  Excited for how much he’s grown and all he is doing now, and how much fun personality he has.  Nostalgic just remembering those earlier days and how brand new everything was.  And just awe at this whole experience.  We love that little guy so much, and just can’t wait to see all the changes to come as he gets bigger.

My plan for this post was to do a year in review, and include all my favorite pictures, but as I started saving the pictures I was up to 70!  I know we all love looking at babies but wow, that’s a lot!  So instead, I decided to go through and share some first born ones, then his monthly ones, and then end with his birthday party that we had last weekend.   So let’s kick it off where it all began….January 3rd, 2018.

Edward Leyton Koch (his first name is Edward – a family tradition, but we call him by his middle name) was born at 4:35pm weighing 7 lbs. 9 oz.  That first picture there is my most favorite.  He just instantly snuggled and it was the best. I remember it like it was yesterday.

The first few months of parenthood were honestly a bit of a blur.  I don’t remember much except for the round the clock routine and just feeling like all we (and by we I mean Leyton) did was eat and sleep.  Eric reminds me often that the first night home from the hospital was so terrible (we didn’t know how to swaddle, he hated the pack-n-play, we didn’t know what we were doing, I bought the stupid Owlet sensor thing and it kept misreading and alarming.  Just pretty much a disaster all around haha).  We used to joke that when people said it flew by we didn’t really get it because to us, the first 3 months, felt like 3 months!  But, once we got into a routine and figured one another out a bit (and bought a bassinet, ditched the Owlet and bought tons of velcro swaddles) we started to really fall into our routine.  I would say ever since 3 months, the time has flown by.

It’s crazy to see just how much he changed in those first 3 months!  I still vividly remember the day we took that 2 month picture.  It was his first huge, happy smile.  I melted to say the least.  I love that memory so much.

Before we move on here are a few parenting thoughts I’m coming clean about:

Okay, those are my rants 🙂 now back to the cute stuff!

Leyton has really been a good baby.  So good in fact it scares me to have other children, because I think, surely you don’t get two really good babies do you?  He’s very happy, smiley, and sweet, and definitely has his dad’s easy going personality (unless he doesn’t get something he wants, then he’s allll mom)!

Oh my goodness, the more I look at these the harder it is to choose a favorite (luckily I don’t have to), I love them all!  Let’s round out the year, shall we?

Before you say anything, I got flack for putting 12 months and not 1 year on the board.  My reasoning behind it was….A. I honestly didn’t think about it and forgot and by the time I realized it I had already gotten the smile and I wasn’t about to tempt fate, and B. All the others one say month so I wanted to end it with months.  Leyton turned a year on January 3rd, 2019.  My parents got into town that day so we did just a little cake for him after dinner. 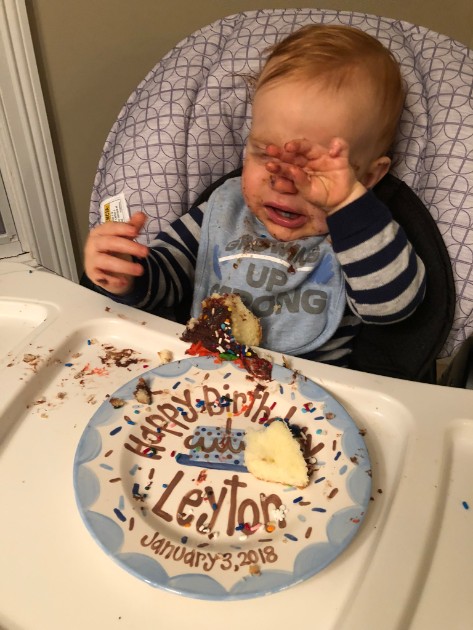 He was tired, and not really into it, but he did enjoy the cake.  Then, we had his birthday party with family on the 5th.

Originally I was going to do a big birthday party with tons of guests, and a winter ONEderland theme. But the more Eric and I talked about it, we didn’t really know who would actually want to attend a baby’s first birthday, and with having just come off the holidays it would have been a lot to put together.  So we went small, just having my parents, Eric’s parents, and his brother and his kids over, and honestly it was perfect.  I was worn out just by that so a big party may have killed me.  In the future (like when he turns 5) when I know he’s going to have a big party, I’ll plan well in advance so it’s done before the holidays.  Here are some pictures from his little celebration. 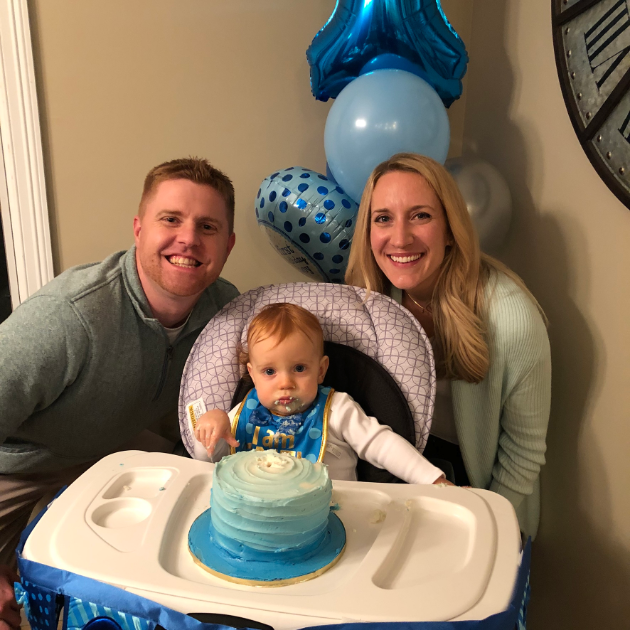 Eric’s cousin Kassie is an incredible baker and made Leyton’s cake.  We went with vanilla with vanilla icing and then she made cupcakes for us to eat.  It was all delicious and Leyton, though gentle with the cake, enjoyed his first sugar rush, none the less.

So that’s it friends!  That has been our year.  We did it, and God willing we will keep figuring it out for years to come.  Thank you so much to everyone that has helped along the way because when they say it takes a village, it takes a freaking village!  I joked that thank goodness I wasn’t the very first person to ever have a child because I would have been clueless.  Luckily, I had many “phone a friends” ready to answers allll my questions, and believe me, I had lots.

We are so blessed to have this little guy in our lives and he’s blessed to have so much love and support all around him.  Have a wonderful weekend.  I’ll see you back here Monday!